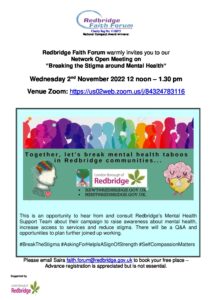 “Breaking the Stigma around Mental Health”

RFF was delighted to welcome to our November 2022 Network Zoom meeting Eve Tobe, Educational Psychologist with the Redbridge Mental Health Support Team (MHS Team).  Because Eve and the MHS Team are working mainly with children and young people they are part of the Redbridge Children’s Service and Educational Psychology Service instead of being embedded in the NHS which is the usual format. This means that they have easy access to schools and are able to deliver a much needed service within that environment, an environment that is part of schoolchildren’s daily life, and is therefore a safe place and less clinical than being referred to a hospital outpatient dept. It means that they are also able to work with often hard to reach pupils who may not have access to Mental Health support if they didn’t receive it in the school environment.

The MHS Team go into both primary and secondary Redbridge schools to deliver low intensity guided self-help to parents and pupils in Primary schools and adolescents directly in Secondary schools which teaches them to deal with low mood, anxiety and behaviour problems. They also work with pupils who have been identified as having defined Mental Health issues.

Eve also gives talks at school assemblies and works with teachers and parents to raise awareness of signs of Mental Health issues in children and young people, explains how to help prevent them and also signposts on how to deal with them when they do occur.  Since October 2021 they have established trained ELSA’s (Emotional Literacy Support Assistants) in ALL Redbridge Schools. These ELSA’s are members of staff within the school who have been specially trained to support pupils who have Mental Health issues.

Eve and the MHS Team have been preparing and are currently running a Breaking the Stigma of Mental Health Campaign. Their main focus is on AWARENESS and ACCESSIBILITY. They want to increase public understanding of emotional wellbeing, decrease stigma and discrimination  and improve access for, and engagement with, services for children and young people and their families. They want to normalise help seeking. If someone is struggling with their emotions they should know that it is very natural to seek help.

In October 2021 Eve and the MHS Team organised a conference for all Mental Health professionals to discuss strategies to break the stigma around Mental Health, and to ensure that everyone was working together with the same aims.

To combat this in May 2022 at Beal High School they launched their “Breaking the Stigma around Mental Health” Campaign. At the launch there were pupil representatives from all of the Redbridge Primary and Secondary Schools, alongside teachers, health professionals etc. They had also, prior to the Campaign launch, run a competition in Redbridge schools to engage pupils in Mental Health and to ask them to design a catchy logo to head up the “Breaking the Stigma” Campaign. The response was enthusiastic and it was difficult to choose a winner but eventually two were chosen, one from the Primary school entries and one from the Secondary School entries.  The winners were announced at the campaign launch and these two logos are now being used on posters, leaflets, bags, tee shirts etc. all around Redbridge.

The “Breaking the Stigma around Mental Health” Campaign was initiated to explore the reasons why stigma occurs, and what exactly is the stigma around Mental Health that prevents children and young people from being diagnosed and seeking and receiving help? It also seeks the answer to how this stigma can be resolved and how the importance of being aware of Mental Health and wellbeing can be raised? And how can we assure that services are accessible to those who really need it?

It is known that the primary obstacle preventing people, children and young adolescents from asking for help is simply the stigma around Mental Health. There are 2 forms of stigma; self stigma and perceived public stigma.

Self stigma is where you believe that you are flawed and therefore unacceptable to others and you don’t deserve help.

Perceived public stigma is how others react to your behaviour or your character, rejecting you as you are considered dangerous or threatening.

Research shows that self compassion, reminding yourself that everyone deserves to be happy, and talking about your feelings with others will lessen both the self stigma and perceived public stigma.

The second barrier is adult family beliefs towards mental health which leads to adolescents not wanting to talk about their problems with their families as they fear rejection and shame being brought upon their family.   A way to resolve this is, as a family, to talk openly about your feelings and it will then be considered the norm to do so.  Emotional literacy will be increased and it is easier for Mental Health issues to be raised and comfortably discussed which leads to a decrease in self stigma.  This will also help identify issues at an early stage as it is very important to access Mental Health support as soon as possible when difficulties are mild to moderate and can be more easily helped.

Eve mentioned a Talking Therapies presentation on South Asian Heritage that she had attended in August which discussed perceived stigma around Mental Health in South Asian communities. Fortunately talking about Mental Health problems is gradually becoming much more open now but most of the stigma is based on a lack of understanding, fear of being rejected or bringing shame on the family, inter-generational conflict regarding integration into society, the pressures of straddling two different worlds and problems of communication regarding pursuing different goals that may be alien to the older generation. She also pointed out that most of these are common and recognisable stigmas in all communities and not just related to certain communities.

In order to get a better understanding of adolescents and their attitude to Mental Health Eve and the MHS Team engaged with School Councils and organized a questionnaire which was answered by pupils across 3 Secondary schools. Pupils on the whole demonstrated an understanding of the issues around Mental Health but were 70% more likely to get help for physical ailments than Mental Health problems. Interestingly, both sexes were more concerned about being negatively perceived by others and spoke of shame, judgment, being embarrassed, and being seen as weak or cowardly if you sought help.  Furthermore, not wanting family to know about mental health issues was the most frequent barrier for female pupils not seeking help, whilst male pupils did not want their friends to know they may have emotional or social problems. However, although family and friends were cited as being barriers to seeking help it also became clear from the questionnaires that talking to family and friends was preferable to talking to a professional. The third highest barrier to seeking help was a mistrust of professionals keeping Mental Health issues confidential.

As a result of the Campaign launch, their work in schools and the questionnaires Eve and her MHS Team realized that:-

There is also work being done with parents so they have an opportunity to voice concerns, learn about Mental Health issues and discover what support is available. Ten webinars have been organised to introduce parents to Mental Health awareness, emotional literacy, to discuss the perceived stigma around Mental Health, and talk about what kinds of emotional issues children and young people are facing;  eg low mood, exam resilience, body positivity, anxiety in children with special needs . The MHS Team is creating a more open and easily contactable presence by attending Parents evening, open evenings, appearing in letters sent out from schools and are in the process of setting up an Agony Aunt column. They are also using QR codes on posters to direct people more easily to the MHS website.

Eve is organising in the Summer 2023 a Wellness Festival to be held in a Redbridge School playing field which will have stalls which will focus on the mental wellbeing of teaching staff and ELSA assistants.

Eve and the MHS Team also work within the community and have had stalls in Ilford Town center to reach out to the community at large and get feedback on how people see Mental Health and Wellbeing. This was very successful in engaging people and hearing what problems they see as being the cause of Mental Health issues. Some of the themes raised were drug misuse, addiction, custody and family support, support for the elderly, support for men, faith and Christianity, the importance of teachers in being a bridge between children and parents, early childhood trauma, and a suggestion that parenting classes would be a great idea and should be mandatory so parents can learn how to help with their children’s emotions. The internet and social media were mentioned as was the cutbacks in Mental Health provision.

How should Mental Health be tackled?  It is known that faith and spirituality are protective factors for Mental Health through the sense of community, the rituals, and the meaning that they bring. It is also known that cultural barriers and a mistrust of professional services are reasons why people do not seek help.

Eve then put people into 6 breakout rooms and set 3 questions to be answered.

Ten minutes was allowed for discussion and then one person from each group would give feedback.

When everyone returned from their breakout room feedback was given. They all agreed that there wasn’t enough time to answer all three questions but some concrete suggestions and comments were given:

Eve thanked everyone for their contributions and stressed that there is Mental Health support available from the websites connected to:

Eve ended her presentation with the MHS Team mission statement and vision :

Nurturing mental health and resilience in Redbridge Schools and communities, we provide a safer, nurturing space to talk and learn about Mental Health and Psychology. We empower people to live their best life by working in partnership with school communities and we strive to reduce stigma, raise awareness and enhance emotional wellbeing and resilience in everyone.

The Chair, Mohamed Omer thanked Eve for her excellent and very informative presentation and for the valuable work that she and the MHS Team are doing in Redbridge. He apologized for the bad Wi-Fi connection/Internet blip which had disrupted the presentation halfway through. He stressed what an important topic Mental Health is and how ensuring good Mental Health and Well Being for everyone is an integral part of our community life. He promised to raise the topic with the leader of the Council to ensure sufficient funding be made available to expand the MHS service.

Mohamed also spoke about how language can be a big barrier when talking about Mental Health issues and suggested it would be good to have Mental Health professionals who speak community languages to be on hand to explain more fully. Young people in particular are used to talking in English at school but at home when they want to translate their feelings and issues it is not always easy for them to translate/explain in their community language.

The Network Zoom Meeting was well attended with 35 members joining the meeting.