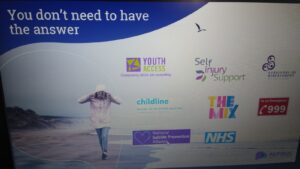 Papyrus is a charity whose mission is to prevent suicide in young people by increasing awareness that suicide is the biggest killer of the under 35s.

As a follow up to the December meeting (Click here to view report) RFF partnered with Papyrus to offer this basic 90 minute SPOT sessions aimed at promoting suicide awareness, the signs to look for and how to signpost young people to organisations that can offer valuable help.  This was oversubscribed and Papyrus offered those on waiting list to join  another session later on the same day.

Hannah, the tutor from Papyrus, gave a brief introduction to the work of Papyrus, how it was established and what the aims of the organization are.

The three main aims of Papyrus are to offer support to the under 35’s considering suicide via their Helpline UK phone line; to equip communities to become suicide safer by offering training opportunities in how to have important conversations about what suicide is and how to help prevent it; and to influence local and national government policies by running campaigns and lobbying the government on important suicide issues.

See the Papyrus site on www.papyrus-uk.org to access information about the organisation and also to access some of their campaign videos, which could be a useful resource for communities, schools, parents to initiate conversations with young people about the topic of suicide. eg Bedtime stories and Bedtime Stories Chapter 2 which discuss online bullying and its effect.

We were also given stark facts about how big an issue suicide is  amongst young people under the age of 35, including teenagers and children!

In 2018, the latest statistics available, suicide is shown to be the biggest killer of young people .

1,866 young people under the age of 35 were recorded as death by suicide. This is an increase of 20% on the previous year.

For every 1 person who has taken their life at least 22 have tried and, in genera,l 1 in 4 adults have admitted thinking about taking their own life at some point in their lives.

The real suicide figure is thought to be actually higher as many suicide deaths are recorded as death by misadventure because the coroner’s proof is more legally based, demands factual proof and has to be beyond reasonable doubt. This is often not possible to ascertain in a suicide.

Future figures however may reflect a truer picture as the law is now stating  a civil standard of proof,  which looks at whether on the balance of probabilities something is more likely than not to have taken place or occurred, should be applied to cases of suspected suicide.

The two questions were:

Why don’t we talk about suicide?

Why should we talk about suicide?

A feedback session followed the breakout group discussion  and the following points were made:

We don’t talk about suicide because :

We should talk about suicide as a topic because :

The second exercise participants were asked to do was based around Language Support. It is very important when  talking about suicide with a person who has indicated they have thought about ending their life this way, or when helping a family who are grieving for someone who has died by suicide, that careful thought is given to the terminology and language used.

The participants looked at phrases and words linked to suicide and then discussed which terms were sensitive, and should be used carefully, and which were less sensitive.  It was pointed out that sometimes a word or phrase we think is okay to use may not be liked by the individual or the family of the deceased so care should be taken to be sensitive and respectful to their wishes and take the lead from them.

For example, “committed suicide” implies a crime or sin and some bereaved families do not like this term as it implies their loved one did something wrong. The word “suicide”  does need to be used,  or acknowledged, however, or it simply increases the stigma of suicide as an act, makes it mysterious, and into one of those “no-no” words.  Therefore “took their life by suicide” could be a better option. Some families may also prefer to use “took their own life” .

Another example  that needs careful thought is  using the phrase “successful suicide attempt”. This is generally not considered a good phrase as it implies something good came of the act. Success in normal terms brings rewards and is felt to be positive thing. When consoling a grieving family however this may not be the best phrase to use.

Language around suicide is very complex  and it is important to be mindful when talking to bereaved families. The phrase “died by suicide” is one which most grieving families seem to prefer.

The next section of the tutorial dealt with Spotting the Signs.

If you are concerned about someone there are signs you could look out for.

Eg Actions – are there noticeable changes in behaviour? Are there small changes? What are they doing new which is worrying ? What are they not doing that they always used to do ?  Are they withdrawing from personal contact? Are they self-harming? Have they lost weight /gained weight? Are they giving possessions away ? Are they saying cryptic goodbyes ?

Eg Thoughts /Feelings  These are all internal but do show externally too . They may also talk about these feelings or thoughts when you have meaningful conversations with them.  Are they angry a lot of the time? Do they appear cold-hearted ? Do they seem numb to pain or circumstances? Do they suddenly appear elated or very happy when  you know they were very miserable before and you are aware of their struggles? This elated mood can sometimes be an important sign as it could indicate they have made their  decision, which is why they are suddenly euphorically happy, but you may think they have turned a corner and are coping. Basically the rule is ANY sudden change in emotion needs an in depth conversation.

Eg. Events  Try and put everything into context. Look at their life events .Is there anything going on in their life which will put a strain on them and make their situation worse ? It could be the anniversary of the death of a loved one. It could be something that has happened to a friend. It could be a job rejection/university place rejection/ relationship breakdown  etc or it could be bullying online, at school, at University at a work place,  that might just be the last straw.  It is worth mentioning here that if a member of the family or close friend has died by suicide then someone is more likely to contemplate it.  It is a fact that many suicides mirror the suicide of a loved one or a friend.

These are just a few of the signs to look out for. The most important thing is to take an holistic approach. If several things don’t seem right then it is time to open up a conversation with them , and suggest, and get them, professional help.

Initiating a conversation about suicide

Discussion then took place around what the barriers are that prevent someone from wanting to talk about themselves and their feelings of suicide.

It was felt that confidentiality and trust are the most important things to establish as these are the reasons why young people in particular do not want to talk . They are afraid of the reaction of adults to their thoughts of suicide. They are afraid of not being taken seriously, of being dismissed lightly, of being told they are overdramatic or attention-seeking. They often have low esteem and don’t feel worthy of being listened to. They may have been previously let down by family, the authorities, social services etc so won’t risk going down that road again.

With respect to trust and confidentiality if you are talking to someone who has indicated they are thinking about suicide you do have to be very up front with them. They have to know that what they tell you is in confidence but if they do tell you something which you feel needs to be dealt with by a professional person you will have to follow safeguarding rules and contact someone on a professional basis and pass information on to them.  Papyrus said that in their experience young people are happy to accept this as you are being honest with them and in most cases if people are willing to talk openly then they are already on the path to considering getting help.

The other area that was discussed was why people who are really concerned about someone are hesitant about trying to start a conversation about suicide ?

It was felt the biggest barrier was the lack of knowledge around suicide and the situation leading to this decision and the lack of confidence to be able to deal with it sufficiently, or successfully. What if I say the wrong thing and I make it worse is a question that is often asked ?  The first thing to realize is that you are simply initiating a conversation. This could be the lifeline that young person needs. That someone is prepared to listen  and is concerned enough to ask the question, is often all that is required for a young person to begin to open up.

You should also be aware of any protocols and policies that need to be followed if this is taking place in a work/school/or other restricted place.

You also need to know that you don’t have to have an answer. You need to say I am going to listen to you, and work with you, and, with your permission and agreement ,if necessary, get you the best support . In this way you are giving that young person HOPE.  You should also get used to asking the important questions if you feel this applies to the young person. Eg Last week you said  Blah Blah….. can we talk this over ? Do you still feel the same? Has anything changed? And get used to asking directly:  Are you thinking of suicide ? Have you had any thoughts of suicide /of ending your life?

The Tutorial concluded  with reinforcing that professional help is most important when dealing with a young person (or anyone) contemplating suicide.  We are all encouraged to have conversations on this subject to remove the stigma and mystery surrounding it and make it an open topic for discussion. Similarly if someone we know in our family, community etc is showing the signs discussed earlier on then an initial conversation showing concern and inviting them to talk about it with you is a good first step to take.  However, if there is any serious concern then it is advisable to get professional help as quickly as possible or if the young person is reluctant to agree to this then ask them to contact the Hopeline at Papyrus where they can talk to trained advisors.

HopelineUK   (0800 068 4141)  is the hotline phone line that  young people or anyone worried about a young person  can call for support.  LanguageLine  also is available via Hopeline UKt o help with any community language use or translation that may be needed.

There are many links to other services on the Papyrus website  – www.papyrus-uk.org  that are available for young people contemplating suicide

Further training is also available from Papyrus . Details are on their website.