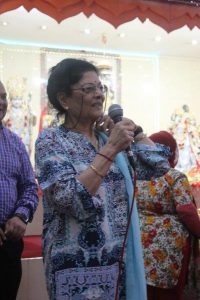 Holi, the festival of colours and bonfires, is one of the most joyful festive holidays of the year. It is celebrated on full moon day in February – March.  Like most Hindu festivals, the date for Holi changes every year because it is dependent on the lunar calendar. It is a celebration of the arrival of Spring, the most beautiful period of the year, with new leaves sprouting on the trees and climate becoming pleasant.

Why is it Holi celebrated?

Holi is associated with many interesting and enlightening ancient legends. The legend most popularly associated with it that of King Hiranyakashyapu and his son Prahlad. It signifies the triumph of good over evil, of devotion overpowering egoistic ambition.

King Hiranyakashyapu was an ambitious ruler who wanted absolute power and forbade all his subjects from worshipping God.  Instead, he forced them to worship him. The King ‘s young son, Prahlad, was an ardent devotee of Lord Vishnu, and despite his father ‘s order, refused to reject the Almighty.

The arrogant King was enraged by Prahlad ‘s defiance and made several unsuccessful attempts to end his life. Finally, Hiranyakash yapu turned to his sister Holika for assistance. She had a divine gift which made her immune to fire. Holika lur ed Prahlad to sit on her lap at the centre of a heap of firewood, believing that she would be unharmed and Prahlad be consumed by the fire. When the bonfire was ignited, Prahlad was unperturbed and prayed to Lord Vishnu.  Prahlad’s devotion saved him, untouched by the flames, whereas Holika was burnt to ashes for misusing her powers.  Narsinha, an avatar of Lord Vishnu, later defeated King Hiranyakashyapu. To mark this legend bonfires are lit on Holi across India.

Other legends for celebrating Holi

It was on this day that Lord Shiva opened his third eye and reduced Kamadeva (Lord of desire) to ashes, when he attempted to disrupt his meditation.

On this day, an ogress (folklore man- eating female monster) named Dhundhi, who terrorised the children in the kingdom of Prithu (or Raghu), was made to flee by their collective shouts and pranks. Though, she had secured several boons making her almost invincible, there was a chink in her armour due to a curse of Lord Shiva: this was the noise of the children. The day itself came to be called ‘Adada’ or’Holika’ and teaches all that evil can be defeated through a united voice.

One more legend pertains to another Holika, also known as Pootana, who came as a charming woman to kill infant Sri Krishna by feeding him with her poisoned breast. Sri Krishna, however, sucked her blood and she lay dead in all her hideous form.

Most relevant message for today is Manu’s message which stipulates the ten attributes of dharma for mankind:

As in the case of all our festival, this too has a profound spiritual significance. Fire is the symbol of yajna which has a powerful purifying property. All our negative physical desires, thoughts and propensities such as arrogance, selfishness, greed, lust and hatred are offered in this purifying and effulgent flame thereby kindling spiritual enlightenment with in our hearts, signifying the victory of righteousness over destructive forces.

How is Holi celebrated

Unlike most Hindu festivals, there are no formal religious observances for this day like fasting or worship. An image of Holika is made of combustible materials and on the night of it is set alight in a simple ceremony with  Mantras-Hymens- of the  Rgveda being sometimes chanted to ward off all evil spirits. Coconuts and corn are often roasted and eaten.

The day after Holi, – is observed as a day of revelry especially by throwing on one another gulal (red powder) or coloured   water or perfumed coloured powder. This playful activity of throwing coloured powder or water is designed to remove the barriers that people sometimes build around themselves. Holi renews the spirit of unity and brotherhood among families and in the community. Holi, the bonfire as well as splashing colours, is now celebrated in all parts of the world where ever there are Indians.