Steps towards and steps away from genocide 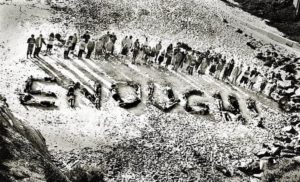 A brief introduction to our educational resources

This project has been prepared by Redbridge Faith Forum. It is designed to be used in secondary schools to examine steps toward genocide and the steps away, referencing the Holocaust and including other genocides and will enhance work done in many schools in Redbridge

Materials have been produced to enable individual teachers to follow session plans independently. Resources include a powerpoint slide presentation for each session.

The module is currently structured on 3 x 100-minute sessions but can be adapted to 6x 50 minutes per session. Students will work in groups of 4-6. This reinforces the aim of the module, for students to value rather than fear difference; this includes listening to those with different opinions.

Resources for each session are provided for the teacher and students. Use has been made of some materials produced by the Holocaust Memorial Trust and other groups like the Corrymeela Community in Northern Ireland. An individual workbook is available for each student - for use during the sessions and for a reminder after.

It is important to become familiar with the structure of the materials prior to presenting the sessions. Each module falls into two distinct sections ~ steps toward and steps away from genocide. In the format of 3 x 100-minute sessions the ‘steps away’ start halfway through session 2

The first half of the module introduces students to, and understanding of, what genocide is using Stanton’s Steps towards genocide and Allport’s Pyramid of Hate. The steps start with the creation of an “out “group in response to problems in society. Isolation of this group begins with name-calling and bullying, escalating to systematic acts of discrimination and ending in state violence unleashed with a view to destroying the whole group. We use the Holocaust as the most horrific example of genocide in the 20th century but also reference other genocides. We identify 3 groups, victims, perpetrators and bystanders, which are always present in genocide. We hear from two victims of the Nazi concentration camps.

After the initial focus on history with a wide-angle view of genocide, students do some activities to help them to recognise when they are stereotyping others and thus creating “them” over/ against “us.” This enables them to be more aware of the ways we each help to start the steps which can lead to genocide when we form stereotypes and prejudices

The second half of the module enables students to become aware of an alternative set of steps which move away from genocide; in particular, it focuses on the ways we can prevent the creation of out groups in the first place. One way is to connect with / get to know better, those groups we see as different so that stereotypes can be avoided.

Students see a film about tourists talking with refugees on the island of Lesvos and how they learn, through their conversations, that the stereotype they have of “refugees” and “Europeans” are not accurate. Students do a similar conversation activity getting to know someone they don’t know very well in the class.

The module goes on to share stories of people who have been ‘upstanders’, both in bullying incidents in school and, more dangerously, in situations of violence.

Finally, students look at some typical scenarios of bullying which they might encounter in their own lives and come up with ways they could respond as an upstander when they become aware of any hate-filled language or action.